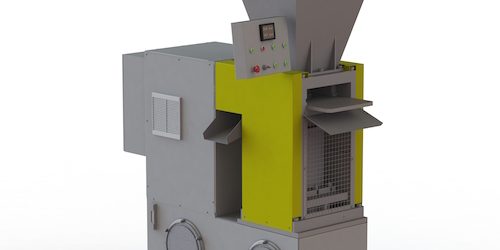 Today I am going to tell you about our latest high pressure brick making machine – TITAN 80 PPSH and in particular about its modification – TITAN 80-720 PPSH model.

I wanted to ask your opinion about what those two things have in common?

Let me tell you about this.

The history of developing of our new «PPSH» series of machines is not really long. All started relatively recently – about year and half ago. We decided to fill in the gap in our high pressure brick making machines family by adding small-scale and affordable model. We wanted to develop high pressure brick machine for «common people». Something similar to the idea of Volkswagen, but, to paraphrase we shall better say – «Volkspresse”.

During development we were oriented on the maximal simplicity and technological effectiveness as for the our future machine. That is why we were using as nickname for this project PPSH abbreviation which goes for the famous WW2 submachine gun (Shpagin machine pistol). The matter is that this particular model serves as an example of superb engineering due to its extreme simplicity and reliability. We also wanted to make something similar but in the brick making machines field and, I’d say, we succeded in this.

We introduce to you possibly the fastest hydraulic brick-making machine in all over the world. The recycling time of this machine is only four seconds, which gives us quite decent figures of 900 bricks per hour. Our machine has working pressure of 80 tons per one brick, which allows to produce bricks with extremely good quality. We shall say, that similar to PPSH machine gun, which is able to shoot 900 rounds per minute our brick machine “shoots” with the speed of «900» brick per hour.

Our motto – «Designed with attention to details!».   We are using only the best quality components – Siemens electric control system, electric engines of Siemens standard, hydraulic valves by Yuken (Japan) and oil pumps from the best suppliers from Taiwan.

We are also manufacturing brick machines with a little bit smaller capacities for clients with strict limitations as for electric consumption.

Please, bear in mind that now it is easy to build so-called «module brick plants» based our PPSH machines. It is very the similar to the server approach when you can build super-server simply by adding «modules». So, it is very scalable and expandable model. Now it is easy to increase production capacity simply by adding machines, which can be integrated with batching stations and stacking equipment. Your investments will grow linearly, not exponentially. I am going to tell you about this in more details later, in my next video.

We have a lot of plans related to improvements of our design by adding super-wear resistant ceramics inserts into the moulds and by increasing speed of our machines to even higher levels.